The Blue and White • December 4, 2020 • https://ahsblueandwhite.com/929/clubs-and-activities/lets-say-salve-to-the-latin-club/

In case you're wondering, the "v" is pronounced like a "w." 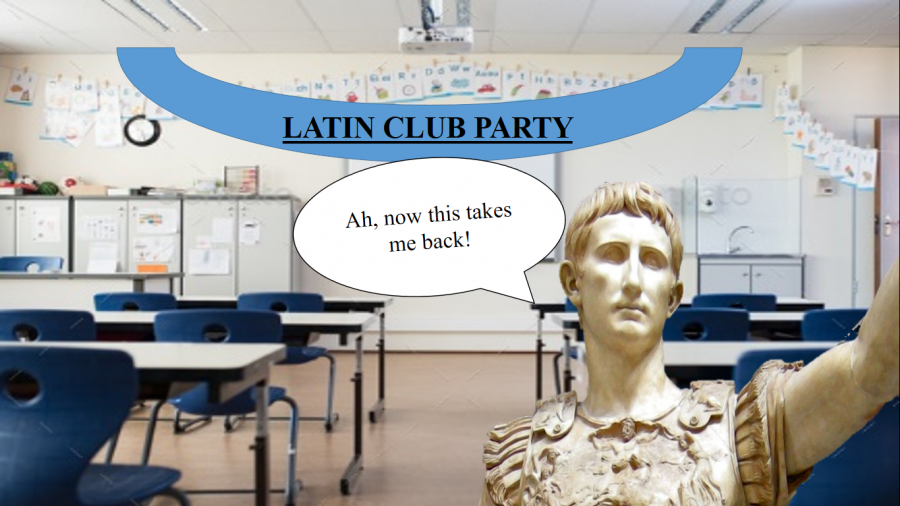 When in Rome, you do as the Romans do. That’s the saying, anyway, and while the Latin Club may not take part in or watch brutal gladiator matches for entertainment, they certainly do know how to have a good, Roman-themed time. For many, the gut reaction to Latin is to simply label it as “a dead language” and completely disregard it. However, the language can still be kept lively, as shown by the activities that the Latin Club participates in.

To find out what exactly the Latin Club gets up to, The Blue and White spoke to Mrs. Katz, Apopka High School’s Latin Teacher and the sponsor of the Latin Club. “It’s a fun club that has no obligations on the students because we don’t do fundraisers and we don’t sit around conjugating verbs or translating Cicero! We just enjoy each other’s’ company and do fun events where we explore things in the ancient world.” The President of the Latin Club, senior Avena Arjoon, elaborated on what sort of activities they participate in (or would have participated in). “Before COVID we hosted events almost every month, so in February we had a Pyramus and Thisbe Scavenger hunt, in March we had a pin the tail on Caesar for the Ides of March, basically we try to relate our events to Roman events.”

As everyone is fully aware, 2020 is not a normal year by any means. That statement applies to the Latin Club, as well. Fortunately, Mrs. Katz was able to describe what a typical year for the club would have looked like. “In a ‘normal’ year we would do an event each month designed to get people together physically. We usually have an ice cream social early in the year to help people get together; we have an Uno competition (because Uno is a Latin word!), we have a T shirt design competition, a scavenger hunt, an Ides of March party and things of that nature.”

On the topic of how COVID has affected Latin Club events, senior Delia Miller, the Junior Vice President of the club, said, “We’ve had to transition all aspects of our club to an online format. Our monthly meetings are now done over BigBlueButton and our newsletters are now available through canvas.” It seems that not even the Latin Club was safe from the disastrous effects of the Coronavirus. Mrs. Katz told The Blue and White that the ice cream socials have found a way to adapt, but with a cost. “We couldn’t provide ice cream, this year, so instead we created an activity made up of teams to see who could work out a variety of word puzzles the fastest with a prize at the end. It was great fun!”  She went on to give a teaser of an upcoming event, saying, “We are going to have a ‘Selfie Bingo’ style game for our next event. I would say more about it, but I am not ready to give away any hints! I think the challenge to think of fun things to do within the limitations that are necessary to keep us all safe and healthy will make us stronger and we’ll be able to appreciate each other even more by the end of the year.”

To conclude this peek into the happenings of the Latin Club, The Blue and White asked the interviewees what they would say to potential future members. Aveena “would tell a potential member that if you want to be in a club where you want to have a good time then Latin Club is perfect club for you. Also being in Latin Club would look great on college applications because you’re distinctive from everyone else and you earn a chord for graduation!” Those all sound like appealing qualities, so if you’re looking for a club in which you can do as the Romans do (in the school-appropriate sense), why not join the Latin Club?