The Blue and White • September 25, 2020 • https://ahsblueandwhite.com/721/arts-and-entertainment/silver-screen-suffers-substantial-setbacks/ 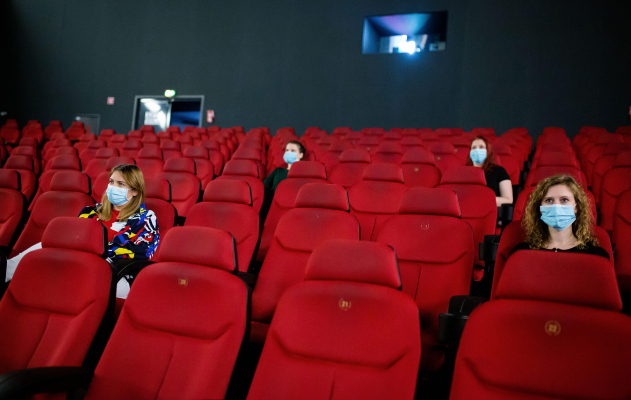 Amidst all the uncertainty that has been caused by COVID-19, the fate of movie theaters has not been particularly high on the list of issues that have been plaguing the minds of most people. However, that is not to say that the theater experience wasn’t missed by those who used to be avid moviegoers.

In the past, the summer months had been reserved for blockbuster films like Jaws and the original Star Wars trilogy. As a result of COVID-19, the world faced a summer without blockbusters for the first time in quite a while. When theaters reopened in August, they were faced with a dilemma: hardly any movie studios were ready to release their films in theaters and lose out on a significant chunk of money. So, in order to recoup their losses from the lockdown period and bring moviegoers back, many theaters decided to play classic films.

One such classic film that has been played in movie theaters is the original Ghostbusters, which first premiered in 1984. “I think it will bring a lot of moviegoers back who want the experience of seeing classic films on a big screen,” said senior Kylie Kidd. The Blue and White also spoke with Kylie to get her insight on the fate of the modern movie theater. On the topic of new safety measures that have been implemented in response to the pandemic, Kylie “felt pretty safe, all things considered. Everything was clean, and they had less movie times, which I’m assuming was because of all the cleaning procedures.” She went on to say that “it didn’t really feel any different compared to before COVID, besides having to wear the masks.” Perhaps as a result of the experience being so similar to a normal visit to the theaters, Kylie feels that the theaters will possibly “be able to recover within a few years and when more new movies are able to be in production, but not now.”

In what is almost the opposite of Kylie’s prediction, Christopher Nolan has said that he believes that his new film, Tenet (which released on the third of September), is going to be what revives movie theaters. Unfortunately, The Blue and White was unable to get in contact with Mr. Nolan for an interview. However, Senior Josh Kennedy, who recently saw the movie in theaters, was indeed available. After seeing Nolan’s latest work, Josh said, “The movie was phenomenal, and any person that is genuinely into movies will appreciate the plot, cinematography, etc. Nolan did an amazing job and the film was like a breath of fresh air. It was the movie I felt that we needed since we’ve been without them for months.” With such high praise for Tenet, it makes sense that Josh believes that theaters have the potential for a comeback. He believes that “recovery will be slow but definitely possible… I feel that people who are itching to watch new movies would rather watch them in theaters if they’re not too concerned with COVID. If studios aren’t releasing them at home, this may also force people into going back to the movies.”

Since (at the time of writing) Tenet still has yet to break even in the box office, it remains uncertain whether or not theaters will ever fully recover from the consequences of COVID-19. No matter what the fate of the modern cinema might be, the role that the movie-going experience holds in our society is undeniable. Hopefully, the global situation will one day be deemed safe enough for everyone to feel that it is once again safe to take a trip to the movies. Until such a time, the decision of going to the movie theaters is simply going to be left up to individuals.