Girls Lacrosse Will Not Take a Loss 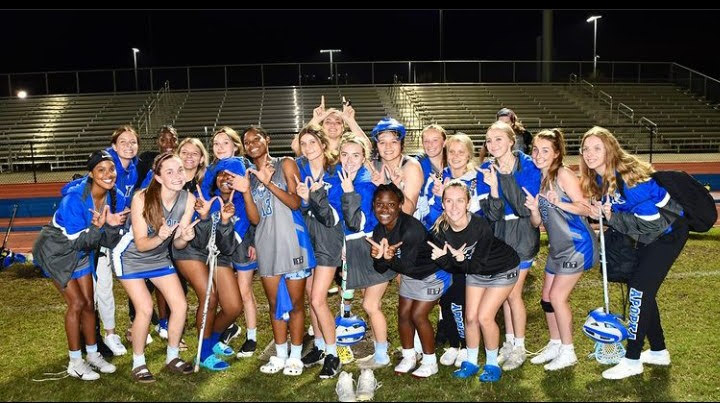 Our girls lacrosse team is sweeping by this season. They have a record of 9-3 and are proud to call themselves the Lady Blue Darters. To get to know the triumph team we had the chance to interview a couple of players, Asia Jones and Emily Touchet. To see what they expect to get out of this season.

Though they do have many new players this year Emily says, “It’s awesome to see how fast they are picking up the sport! We are getting into our groove as teammates and we are working together well in games!” Asia also believes if they really go for what they want they can achieve it! As you can see, they have very positive attitudes about this season. The win against Edgewater, with the score of 14-4, lit a fire in the spirits of the players. They are ready to charge forward and win some more.

The girls also do have an idea of who they believe to be their biggest competitor. Asia believes it to be Windemere due to them having a lot of stick skilled people and Emily believes the hardest team they’ve gone against was West Orange High School due to having very skilled players, “They are a challenge every year.” They also said who they believed to be the easiest team to beat and they both agreed on Ocoee. Asia says,”They didn’t really know the game as well as we did.” Which is why Emily uses games like these to brush up on your skills and she was even able to make her first goal as a defender!

Though it may seem like they are breezing through this season, they do face some challenges along the way. Due to their being so many new players on the team, “it takes some time to get used to how they play.” Emily says. Asia believes one of her challenges she’s faced so far in the season is, “when we were up by 4 but the other team caught up and they were down by 1 so we had to play lockdown defense.”

They also had their senior night, this Tuesday and won against the Titans of Olympia with the score of 10-1.

These girls are working and playing hard and you can see that if you attend one of their games coming up. You won’t want to miss out.

The Blue and White did reach to the coaches but didn’t get a response.