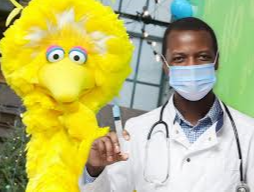 In early November, child character Big Bird made headlines by “getting vaccinated” against COVID 19. This came to the demise of Texas Senator Ted Cruz, who labelled the tweet announcing his vaccination as “government propaganda.” Big Bird received the vaccine in an effort to promote the vaccine for children 5-11, as the COVID vaccine recently received authorization for those age groups.

Big Bird joins a growing number of celebrities and influential figures to receive and promote the COVID vaccine. Politicians including former Vice President Mike Pence, President Biden, and Vice President Kamala Harris have all gotten the shot on camera, so viewers all around the world can see the vaccine is safe and effective. Also promoting the vaccine, are thousands of actors, musicians, and other influential people.

But media attention hasn’t been all positive. Recently, quarterback Aaron Rodgers for the Green Bay Packers made headlines when he tested positive for COVID, and was required to sit out a mandatory ten days, as is the NFL’s policy for unvaccinated players. The controversy, however, is that he is unvaccinated. In an interview earlier in the season, Rodgers said that he was “immunized”, in response to a question asking if he was vaccinated, making many to believe he was vaccinated.

Rodgers declined to take the mRNA vaccines due to allergy concerns, and the J&J vaccine due to blood clotting concerns. However, he openly admitted to following the experience of Podcaster Joe Rogan, to how he was treated when he was COVID positive, which included the use of ivermectin. Many feel like Aaron Rodgers let down his team, due to being previously misleading on his vaccine status, which led to him missing the week nine matchup against Kansas City, where the Packers lost 13-7.

For better or worse, most adults have already made up their minds about getting the vaccine. Out of the unvaccinated adults in the country, over 80% say they have no plans to get the vaccine. And for children, approximately a third of parents will not vaccinate their young children, about a third that will, and a third that are undecided.

In orange county, the COVID situation is better than ever. Orange County currently sits at a seven day average of 55 cases. In Orange County, 78.4% of people have one shot and 66.5% are fully vaccinated against COVID.