The Blue and White • April 30, 2021 • https://ahsblueandwhite.com/2120/perspectives/why-pro-athletes-shouldnt-just-shut-up-and-dribble/

Why Pro Athletes Shouldn’t Just “Shut Up And Dribble” 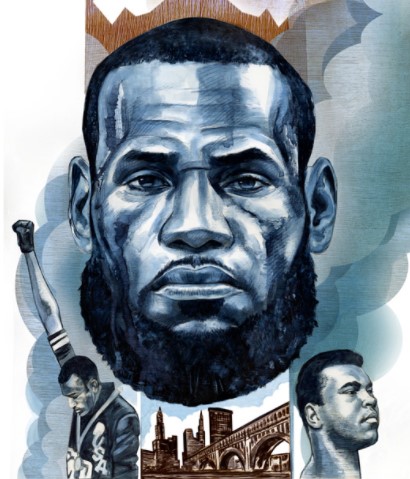 The Perspectives page of The Blue and White offers students and staff an opportunity to express their thoughts about topics that affect our school, our community, or the world at large. The views and opinions expressed are those of the author and do not necessarily reflect the official policy or position of The Blue and White.

The following article was contributed by Junior Carson Mays:

Everyone’s probably heard of the infamous Colin Kapernick kneel during the national anthem or the famous quote, “Shut up and dribble” which came from a reporter speaking on Lebron James’s outspokenness on his political opinion; but the connection between pro sports and politics runs much deeper than these two instances. Many great professional athletes have fought for their political beliefs and used their platform as a way to get it out to people.

One early example is Muhammad Ali in 1967 when he retained his right to not be inducted into the U.S. Army on religious grounds. His actions surprised many people as many followed his boxing career and he was one of the most profound athletes of that time. “He stood in the face of that and refused any suggestion that he be anything other than himself”, says Kevin Blackistone, a journalism professor at the University of Maryland. Ali also did not support the Vietnam War efforts in the mid-1960s which went against the majority. Muhammad Ali’s courage and willingness to stand up to the majority set the pace for many political outakes by professional athletes and organizations to come.

As we all know, in 2016, Colin Kapernick took a knee during the National Anthem before playing in one of his football games. This protest sparked one of the biggest social movements in the history of pro sports and also created the most involvement of pro sports in politics. The focus of Kapernick’s protest was to fight against police brutality towards African-Americans. Many took it as he was disrespecting the American flag which was not the case. Fans created signs saying, “You’re an American. Start acting like one”. The main idea of his protest was overshadowed by social media’s belief he was protesting the flag. He was criticized by other players for being “not black” and anti-Kapernick videos were made against him. His efforts costed him his spot in the NFL as no team has been willing to pick him up over the past few years.

In 2020, many unarmed Black people, such as George Floyd, Breonna Taylor, and Ahmaud Arbury, were killed unrightfully by police or citizens. The death of these individuals caused one of the biggest racial divides in U.S. history. Sports leagues and athletes began using their platforms to get the message out that what was being done was not right. From the NBA allowing players to put sayings like “Black Lives Matter”, “Education Reform”, and “Say Their Names” on the back of their jerseys to the NFL putting the names of innocent Black people who were killed on their helmets, their message was being heard by many. The NBA and the WNBA both protested by deciding to not play the first few games of the restart of their seasons. These were only a small amount of the things various pro sports leagues did in order to get the message heard about racial injustice.

The effect of the results of events which occurred in early 2020 spilled all the way into late 2020 which happened to be the same time as the presidential election. With the debate on whether the election was being tampered with becoming prevalent, many pro athletes began to give their opinion on voting. One of the major advocates of voting, particularly black voting, was star NBA player Lebron James. He, along with many other athletes and artists, launched the Protect our Power plan under the More than a Vote organization. The organization’s focal point is to combat voter suppression, as state legislatures across the country advance legislation to restrict ballot access. They want to get as many black votes as possible so as a people they can feel that their voices are being heard. The organization has been pretty successful thus far, and will continue to be for years to come. “Look what we made happen. What our voices made possible. And now, look what they’re trying to do to silence us. Using every trick in the book, and attacking democracy itself. Because they saw what we’re capable of, and they fear it.”, James said.

The powerful voices of professional athletes such as Lebron James, Colin Kapernick, and Muhammad Ali are what’s necessary in order to create change in the world. Many people who support these players will also support their beliefs in order to provide better for our future. Athletes now need to continue in the footsteps of those who precede them as change doesn’t stop now. It is important for pro athletes to continue to use their platform to prevent continuity of what’s been happening for far too long or to spark new ideas that can evoke a better future for our country and its people.